“Thousands of tired, nerve-shaken, over-civilized people are beginning to find out that going to the mountains is going home; that wildness is a necessity”

Every winter we award scholarships to runners to tackle the race of their choosing. We support them financially, training, and with encouragement and energy. In return they wear our shirt, and write us a post race recap.

As one of our sponsorship winners in 2015, Danielle Snyder traveled to Canada to tackle the Squamish 50K. Her story is below.

Some experiences are difficult to explain using words, the vastness of the experience is just too great to capture. Usually I can do a pretty good job somehow finding a way to describe it but trying to come up with the right words for my Squamish experience has been utterly impossible. As a part of my TrailsROC’s sponsorship, I was asked to complete a race report and I have just struggled to get my shit together and write something that completely captures the experience. Here is my futile effort at describing something that can’t be described:

Back in August, my friend, Tammy, started to research races and spotted a race called SQUAMISH. Like any good runner friend, she told me to look up the race. She said something about mountains, it being called Squamish and I didn’t need to look up the race, I just told her I was in. This is how most of my trail adventures start, limited knowledge about the actual race and more of a tag along effort. As awesome as Squamish sounded, it seemed a bit far fetched. We chatted about it and I decided to enter the TrailsROC’s scholarship on a whim not thinking I would win. Somehow, out of all the other awesome applicants, I was picked to represent TrailsRoc at Squamish. This locked me into the race and I called up Tammy and said: “Hope you were serious about this race because we are going!” (I am not sure any of us were that serious about it until that point). Since winning the scholarship, it has been a series of ups and down training for the race. Tammy, the mastermind behind the plan, had to undergo a significant surgery and could not run. Watching a friend being unable to do the thing she loves is heartbreaking. But in true Tammy form, she went along for the ride, was one of the main reasons this trip happened and the race was successful.

Prior to leaving for BC, my amazing friends threw me a party to celebrate the experience. I couldn’t write this race report without recognizing how thoughtful it was for them to do that. Although I am a tad superstitious (by tad, I mean EXTREMELY), they handled me trying to cancel the party because I was so afraid I was not going to finish. To a lot of people, it was only a 50k but to me, it was going to be a huge challenge. My friends who love me regardless of my idiosyncrasies, refused to cancel and gave me the best party a girl could ask for! I left for the trip feeling extremely blessed and encouraged. The three of us (Tammy, Emily and I) boarded a propeller plane seating 20 people to begin the adventure on August 19th. We arrived in the gorgeous city of Vancouver and everywhere you look there are mountains. I fell in love with BC as soon as we arrived and the days leading up to the race were full of exploring: we went to a nude beach, explored the city and mountains. The night before the race, we went to packet pickup and just seeing the other runners gave me butterflies. They had some serious muscles and you could tell these runners were the real deal.

August 23: The morning of the race! We wake up and there is a huge crack in the windshield of our rental car…. and it proceeds to get worse as we drive the winding mountains to the start. Thankfully we arrived at the start without a complete shattered windshield!

The morning was gorgeous, a bit chilly but temps were predicated to get hot. I have butterflies in my stomach and am so thankful for Em and Tammy to keep me semi-calm. The RD talked a bit to us and informed us that anyone who liters is DQ’ed (which I dig). Everywhere I look around, people are smiling and embracing each other. Even in a city so far away, I immediately feel welcomed and reminded about why I love the trail community. The start was mostly single and dusty track, it had not rained for quite sometime. I had heard the first 10k was flat but around mile 3, we encountered a portion kindly termed a “hill”. This was not a hill, it was the size of Bristol!!! But the runners around me informed that this was nothing compared to what was going to happen. I quickly learned that Rochester and BC’s definition of flat vastly differs. Going up the little warm-up hill, I talked to this Adidas Rep who filled me in a about the race and warned me about the portions to come. He said after this flat portion the real climbing started and boy, was he right! After the first Aid Station, we came to the first big climb of the course which I was told was the worst. It went up, up and then up some more. I cruised through the climb but the downhill killed me. It was super technical and my quads did not get that type of training. Feeling a bit discouraged about the fact I was so tired before Mile 10, I focused on the beautiful trails and making it to Tammy. At mile 15, I finally make it to Tammy! As I climb towards the aid station, I look up and the entire courtyard is full of dogs. I think mountain and puppies, this is my heaven. I see Tammy smiling and I am just beyond grateful for her support. I tell her: “this is the fucking hardest thing I have ever done.” Then hugged a stranger’s dog for a bit. It had gotten really hot at this point and as happy as I was to see her, I was really tired already. I got a little teary-eyed and told her I didn’t know how I was going to finish. Like any good friend, she said something along the lines of,” oh you are finishing. Now go.” And Off I went! Every climb I completed, I focused on the amazing views and continued to fight with the voice that told me I wasn’t going to finish. I continued to just tell myself make it to Tammy at the last check point. My legs got less tired and I started to make up some time. At the final check point, Tammy was expected to be there. When I arrived and she wasn’t there, I decided in my head that I had ran the last section so fast, I beat my crew! Looking back now, I recognize that is not possible but during the race, it was such a motivating thought. The last miles of the course are what some consider the hardest but at this point, I knew I was finishing and just kept moving. We climbed one of the harder climbs of the day and met some dude at the top who informed us it was smooth sailing from there. At the bottom of the climb, there were some rock climbers hanging out on the cliffs. I stopped for a few seconds, asked if I could climb and then remembered I had to finish this race and started moving again. Someone yelled at me only 2 km left and I was pumped until I realized I had no idea how far 2 km was… I was ready to be done. In the past, the last mile of a race has always been a grind but this race, the voice of my friend, Liz came to me. She always says: “This is the last mile you will ever run for this race, you better enjoy it. “ And that I did. I actually looked back and took in the mountains we just climbed and let it soak in. I head up the road saw Tammy’s smiling face and headed towards Gary (the RD) for the finish. Gary is well-known in BC for his huge hugs for every racer who finishes and he had a huge hug waiting for me as I crossed the finish line.

The website for Squamish reads: “The Squamish 50 races are TOUGH, truly unforgettable trail running experiences. The Squamish 50 – 50 km is a very challenging course as evidenced by the 11-hour cut off time. ” (Ascent: 2500 m / 8500 ft Descent: 2750 m). I had read that description prior to starting to the course but didn’t really process it until I saw the mountains. I thought I had climbed mountains before this race. I thought I understood what mountain running was. And boy, was I wrong! Going up one of the mountains, I pointed out an amazing view, someone recognized my accent and asked where I was from. I told them New York and they asked me how I trained for this type of climbing. I talked about my trips to the ADK’s and hill repeats and the guy laughed. He said: “The Adirondacks are molehills compared to our mountains.” At some point in my life I might have been offended by this comment but after that race, I couldn’t agree more with that statement. Those were some mountains.

Even on beautiful amazing trails, when it gets tough, it is really easy to get down on yourself. You start to look at your accomplishments and there is always someone who is running more, harder, longer, etc. It is hard as a human not to compare yourself to other’s accomplishments and start to belittle yourself or not believe in yourself. After you work so hard for a goal, it is difficult not to think about what you could have done better. Each time I go into the woods, I always receive a take home lesson. In the mountains of British Columbia, I learned that it is not about the fastest time, the furthest distance but about the amount of heart. I can honestly say, I have never used as much heart during a race as I did during Squamish. It was by far, the hardest thing I have ever done in my life. Not only because the size of the mountains but because I was able to overcome not believing in myself. Toeing that start line, the biggest challenge for me was starting the race not believing in myself. Somehow those mountains helped find a portion of myself I had lost. I’ve said it before and I am sure will say it again but the mountains are like coming home.

I am so very grateful to TrailsROC for the scholarship. Without the scholarship, I am not sure this adventure would have happened and it helped propel a once in a life time change to run an amazing race. And to my friends and family who never stop believing in me (even when I don’t believe in myself), I couldn’t do anything without you guys. Life is very much like the trails we run, when things get hard, you put one foot in front of the other and hang on until it gets easier. 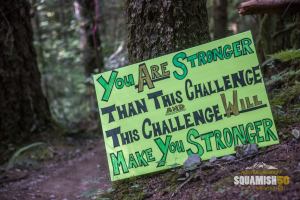 This entry was posted in Race Recap.